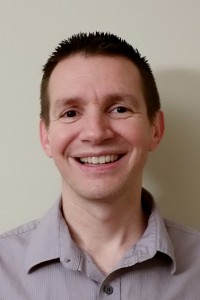 Hi everyone – I’m Jim White, the author of What’s a Picture Worth? and Just the Computer Essentials.

Where it began…
Believe it or not, years ago I was an art major at Kent State University. I had used computers, but didn’t really know anything about them.  Then I stumbled upon a class that I needed to take as an elective called “Intro to Computers.” The class was taught by a great professor, Dr. Geofferey Steinberg. Although it dealt mostly with MS-DOS and Windows 3.1, I found it to be very interesting – it was different than other subjects and had some excitement to it.

In fact, I found it so interesting that shortly after, I walked out of one of my art classes and never looked back. I changed my major to Computer Information Systems and started taking all sorts of different classes – networking, programming, web design, whatever I could find.

The career change…
When I had started college, I got a job working in retail. I started part-time, but before I knew it, I was working full-time, and then a department manager, and then an assistant store manager. Well, there’s some good and bad with that. On one hand, I was proud of how quickly I had moved up, but on the other hand, I was working a lot. In fact, I was working around 50 hours a week, plus trying my darndest to finish college.

Although I enjoyed retail, the people I worked with, and some of the challenges it provided, I definitely didn’t want to do it forever. I mean, this was just a job to help pay for school and there I was still there almost 5 years later – the key word being “almost.”

Then one day a fellow assistant manager I was working with happened to casually mention that he had heard a statistic that said on average, if you were working in retail for 5 years, you would most likely stay in retail as a permanent career.

And although I had been thinking that I needed to get out of that field, that one comment was my motivation. It was shortly after that happened that I turned in my notice. I was ready to get into the realm of computers. I had no job when I left, no experience in the computer industry, and I was still in school. All I knew was it was now or never.

So, I spent the next few weeks preparing resumes and walking door-to-door to as many technology companies I could find and introduced myself to the personnel manager. I didn’t do real well (as was expected!) and had one interview with a company that I really didn’t care for… then it happened. I got a call from one company where I had just left a resume at the front desk – BPI Information Systems.

I was called in for an interview that went well. Then I was brought in for a second interview with the president of the company. I was very up-front with him, letting him know that I really didn’t know much about technology yet and had no hands-on experience. That said, he was happy about my customer service background that my retail experience had provided, and he took a chance and brought me on board. I would be reporting to the president of the company as a Systems Engineer.

The Systems Engineer’s job was to take service tickets that came in and work with customers on network and server problems or opportunities. It entailed doing the scheduling of the calls, working with customers and our sales department, documentation, and a variety of projects, among other things.

Soaking up everything I could…
As a new Systems Engineer, I now had my foot in the door and was excited to learn everything there was. I didn’t just sit back – I think I drove everyone there nuts, asking question after question. I wasn’t content just knowing that something could be done… I needed to know how to accomplish it as well.

I was also sent to training for different technologies, such as Microsoft products. I was told that he would throw as much training at me as I could take, assuming that I continued to keep up and pass the certification exams that came with the training. Over the next few years, I learned so much both from the training and studying, as well as the on-the-job field experience. Here are some of the certifications I gained:

In addition to the work experience, I learned quite a bit outside of work as well. I really enjoyed programming using Visual Basic and web design (the old-school way using only HTML coding). And, I think I worked on computers for friends and family more than I could count.

The step up…
After about 6 years as a Systems Engineer, I was ready to try something a little different. And I was given that chance when I was offered the position of managing the Systems Engineers in 2005. The position had been handled by the president up until this point, but the company had grown to a point where it only made sense to have a designated position for it. And I was given that shot. This gave me an opportunity to get into the operational side of things, but still work with the other engineers.

And I’ve been doing that ever since. I still report directly to the president of the company and continue to learn something new all the time.

The first book…
With all the work I was doing with computers, I spent a lot of time working on computers for friends and family. I really enjoyed it… for a while. But over time, it got to be a burden. Why wasn’t there a book for the average computer user. There were books for dummies and books for geniuses, but almost every home or home office computer I worked on was for people in between – people who know how to get around on a computer to check email, work a little bit with pictures or music, surf the web, and work with office programs.

What they didn’t know how to do were things like…

Hmmm… I know how to do this stuff and I know how to bring things down from an overly-complicated level so anyone can understand it. Wait a minute!! Why don’t I write a book about this stuff?!

And that’s what happened. In mid 2005, I got started working on the book. The Windows Vista™ operating system was in beta (meaning that it was still being developed and was privately available for testing). I was able to work with this operating system throughout its development, learn the ins and outs of it, and apply that information to the book.

Shortly after the official release of the Windows Vista™ operating system to consumers in the beginning of 2007, Just the Computer Essentials was published.

The second book…
In 2014, I realized that there was another need out there.  A lot of people continue to take a ton of great photos, but then just get them over to their computer (hopefully) where they just sit and gather “computer dust.”  So that got me started on my next book – except by now I had a daughter… who would have thought that a four-year-old would make writing a book so tough???!!! 🙂

Regardless, I pushed through and in February 2015, What’s a Picture Worth? was published.

So, that’s my story – I hope that my books will help either you or someone you know.