I discussed in my last blog entry some of the different decisions that need to be made when converting your music to digital such as MP3 files (see Converting a music CD collection to digital MP3 files). Now I want to talk about another topic you may want to be thinking about – what kind of portable music player to get.

MP3 files have been around for years, but portable music players had their real take off when Apple introduced the infamous iPod. Since the time the iPod showed up, they have ruled the market. Apple is known for making products that are in a word… cool. They not only look cool, but they seem to always be designed exceptionally well. The iPod is no exception – it’s simple, yet effective. It works on both Macs and PCs and it integrates seamlessly with Apple’s iTunes software. But, it’s not the only game in town.

When I decided to get my first portable music player, I had a number of things that I wanted to keep in mind – value for the money spent, available features, and music management.

Now, before we get rolling, just know that I’m not here to tell you that you don’t want an iPod. In fact, I’ve recommended them to many friends and family members for one big reason – simplicity. Of all the music players I’ve seen, the iPod along with iTunes has got to be the least complicated to set up and use. And if you’re not the most “technically gifted” (how’s that for politically correct?!), this may just be the player you want to get. The iPod usually lives up to its reputation and they have a strong following of satisfied customers.

So, why not get an iPod? Well, the biggest reason is price. The iPod is generally going to be one of the most expensive portable music players out there when comparing storage and features.

One such feature not currently available on an iPod, but found on many other portable music players is an FM radio. If this is a big deal to you, then the iPod, might not be the right device for you.

Here are just some of the features available with different music players:

It’s up to you to decide which of these features would be important to you – it’s like car shopping – different models have different advantages and disadvantages. Of course, how can we forget about Apple’s new iPhone – again it definitely has the “cool” factor to it, but you’ll have to decide if the cost is worth it to you. And word has it they are looking to make a smaller, less expensive model to be released later this year (http://blogs.pcworld.com/staffblog/archives/004855.html).

I should probably also mention that Microsoft’s Zune player is worth a look as well (http://www.zune.net/). Price-wise it is usually around the same as the iPod and offers some interesting features such as wireless sharing of music with other Zune users.

For me, music management was very important in my decision. In my last blog entry (Converting a music CD collection to digital MP3 files), I talked about converting around 735 CDs worth of my music to MP3 files. Music management becomes important because not all management software works with all devices. For instance, iTunes only works with the iPod music player. Additionally, very few software applications can be used to synchronize your music with iPod players. On the other side of things, certain management software will only support PlaysForSure devices.

I needed to have software that did what I wanted it to do and would still work with whatever portable music player I decided to get. I think iTunes is fantastic as music management software and helped me to rip all my music to digital files using Variable Bit Rate (VBR) encoding (again, see Converting a music CD collection to digital MP3 files), but you can only use it to sync to an iPod.

When Microsoft released Windows Vista, it came with a new completely-revamped version of Windows Media Player. Version 11, also available for download for Windows XP SP2 (http://www.microsoft.com/windows/windowsmedia/player/11/default.aspx), was a much needed overhaul and was very well designed. I think this is actually one of the best music management software applications on the market right now. And it’s compatible with all PlaysForSure devices – so if you go to the store and find the MP3 player you like, if it has the PlaysForSure logo on it, it should work with Windows Media Player 11 right out of the box.

Here’s just a couple other music management programs out there:

Additionally, most portable music players offer their own music management software that you can (or may be required) to use. 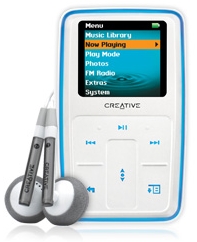 After contemplating some of the different options I’ve talked about, in the summer of 2006, I decided on an 8 GB Creative ZEN MicroPhoto Player (http://www.creative.com/). This was the largest non-mechanical capacity available. It doesn’t hold all my music at once, but I can shuffle playlists of the music I like. It provides the ability to listen to music files and view pictures. It also has an FM radio and a voice recorder built in. In addition, it provided the ability to synchronize my Microsoft Outlook data – calendar, address book, and tasks (this one was a real bonus for me!). It also provides a standard replaceable lithium battery. If the battery dies, no problem. On an iPod, if the battery dies, the unit needs to be replaced – not very convenient.

I found a great deal on it at Circuit City for only around $169 and I’ve been extremely happy with it. Not only does it do everything it promises, but I was able to get a small set of TravelSound speakers for it from Creative and now I can bring it along for cookouts, camping, and other get togethers.

Eventually, I’ll be looking for a replacement player and by then I have a feeling that most of the rules will have changed. But either way, it pays to do your research before jumping into something like this.

I’ve also been happily using Windows Media Player 11 as my music management software and everything is working harmoniously (pun intended!).

Thanks for sticking around – don’t forget to take a look at my book Just the Computer Essentials for an easy to understand guide to buying and maintaining a new computer… with the Windows Vista operating system becoming the standard on new PCs, this is the book you need!!